A walk through the Romanesque vestiges of Spoleto necessarily passes by the church of San Pietro. Nothing remains of the original building, built in the fifth century on the site of an ancient cemetery. The original church was actually demolished in the twelfth century to make way for a new church in the Romanesque style. Even the interior of this second building remains only in memory, since in the seventeenth century it was rebuilt again in Baroque style. But fortunately the Romanesque façade preserves its original sculptural decoration, carved by skilled craftsmen on local grey limestone blocks .

First, we have the example of the three scenes carved on the right side of the portal, which attracted my attention particularly because of their highly narrative character: above you see a lion with his paw stuck in a tree trunk.  In front of the beast is a male figure holding an ax. It would seem to be a lumberjack in the process of splitting the tree trunk to release the trapped lion.
In the scene below the beast does not seem threatening: it stands in front of a male figure kneeling and disarmed. That the lion has a friendly attitude is confirmed by the fact that his tail is between his legs, perhaps out of fear or because of submission. It almost seems that the animal has recognized the man in front of him, who long ago freed his trapped leg. The hat and the dress worn by the kneeling character are very similar to those worn by the woodcutter in the scene above. Even the relaxed position of the front paws of the lion exhibits anything but a ferocious and dangerous animal.

But if in this scene the beast does not attack the man, rather it recognizes him as a friend, then in the scene below, things are quite different.  Here the lion shows his aggression. The tail is facing up, and with his claws he firmly holds the head of the man who attacked him, ready to devour him. The sword that the victim is holding in his right hand seems to be saying that the man on the ground had tried in vain to fight before being overwhelmed. From the clothes he wears he appears to be a warrior, not a humble and harmless man like the one depicted in the scene above.

To better understand the symbolic significance of these reliefs, we have to refer to the texts of the medieval Bestiaries where animals appear as protagonists with highly allegorical functions.
The lion, for example, is seen as an animal that would never hurt a defenseless man, nor assail an unarmed man, but on the contrary would menace the warrior who tries to attack him.

In the so-called “Bestiario d’Amore” (Bestiary of Love) it is also said that the lion is like love, attacking only those who look into his eyes: “Amore cattura l’uomo ai primi incontri per mezzo degli occhi, e per questa via l’uomo perde il cervello” (Love captures man from the first meeting of the eyes, and in this way he loses reason).

As stated by the studious Franco Cardini in his interesting iconographic study (his articles have been edited in Abstracta with the title “Mostri, Belve, Animali nell’immaginario medievale” and in  Airesis – Il giardino dei Magi) all that can be referred to as “zoologia immaginaria”  (imaginary zoology) of the Middle Ages – and that draws its source from the Bible, from Phaedrus, from legends that penetrated Eastern Europe within the cultures of the steppes and with the texts on Alessandro’s expedition to India – along with individual and collective visions and astrological symbols, is not a jumble of fantasy but rather “un linguaggio con la sua grammatica, la sua sintassi, il suo svolgimento etimologico, la sua avventura semantica” (a language with its own grammar, its own syntax, its own etymological development, and its semantic adventure).
This symbolic language, very similar to the one used in the Romanesque reliefs of San Pietro, would represents a religious sermon with strong moral content; a great page of stone with alternating floral motifs, real and imaginary animals, earthly symbols and heavenly allegories, blended and united in order to maintain and nurture the common imagination, derived in part from traditions older than Christianity.

Let’s return to the reliefs of the façade. Above, among the scenes from the life of St. Peter, we find represented the calling of the first two apostles, Andrew and Simon. What follows is the ceremony of the washing of the feet and, finally, the struggle between good and evil, personified by a demon and an angel who compete for the soul of a dying man. In another scene, the soul of the deceased, weighed down in judgment, appears to be in the devil’s favor.  Then, the devil grabs the condemned by the hair, and throws him down the well, as a kind of deeper symbol of the passage to the underworld.

Below, more precisely in the two compartments on either side of the portal, a farmer leads two oxes. This is one of the many items in the inventory about working in the fields, inherited from ancient art, which in the Middle Ages would be assimilated into the calendar cycles of monthly work.

Above there is a deer that bites a snake and nurses her young, perhaps a symbol of the sacrament of baptism, through which one can attain salvation. There are deer holding snakes in their mouth and peacocks pecking grapes on the facade of St. Peter’s, like in the Greek and Latin bestiaries. The message seems to be an invitation to enter the church to die and then to live again. In the two panels on either side of the arch there are two eagles, also symbols of rebirth through baptism.

As for the style of the façade, the vertical and horizontal lines are typical of the Romanesque period, an architectural style that was characterized by geometric order and regularity.  The combined set of crosses and palmettes, acanthus scrolls and vines, deer, peacocks, birds and lions, find their inspiration in the Christian churches of the territory of Spoleto, like the San Salvatore church and the Temple of Clitunno (just to the north along the Via Flaminia). These early christian buildings, dating back to the Lombard Spoleto,  must have been an important architectural pattern not only for the medieval church of San Pietro, but also for most of the contemporary Romanesque churches of Umbria. 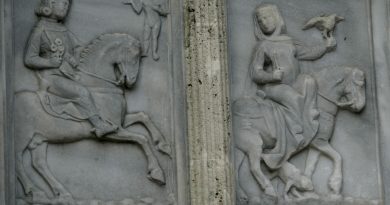 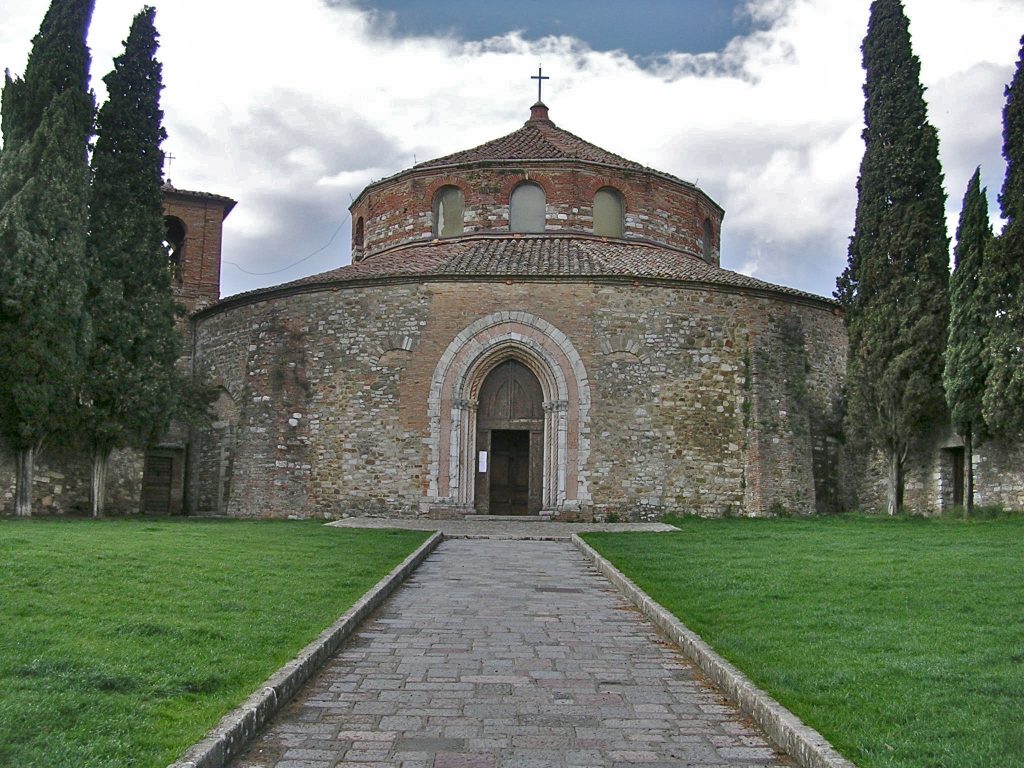 The mystery of Greek inscriptions in the Temple